The 960 state qualifiers and alternates have converged on the Berry Center in Cypress.  While local athletes stopped by to check weight after school, others piled out of buses and hit the mats for a few drills and a last minute practice.  Ray and I set up our monitors, power strips and battery chargers at the far end of the media work area and cruised the arena floor to pick up the latest scoop and talk about brackets, what the heck happened to some of our favorite wrestlers in regionals, and academic eligibility.

Just when you thought you had the brackets figured out…

Many districts in the state just finished a grading period this week.  Under the no pass – no play rule, students with failing grades lose athletic eligibility starting at the end of the school day tomorrow.  Word is, there are at least a couple of wrestlers (and alternates) who will NOT be entering the tournament.  We haven’t seen anything official yet, trackwrestling isn’t updated, but we are ready to hit the delete key and rework some of our bracketology.  Who knows, maybe it will be updated and posted by the time we start wrestling – stay tuned.

Everywhere we walked on the floor we could overhear kids discussing how much they had to cut to make weight in the morning.  None of us heard any big numbers – but it seems like there are always one or two unlucky kids on Friday morning.  If a wrestler steps on the scale and fails to make weight, the alternate does NOT get into the tournament – it just goes as a first round bye. 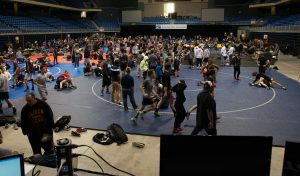 After the annual coaches meeting, hashing over the usual topics, wrestlers and coaches slowly trickled out, heading off to dinner or hotels.  The final group to clear out was Coach Bayonne and the Richmond Foster team, having finished a short set of daily drills before the mats were closed at 7:30 for the start of the referee clinic.  (Yes, even the refs brush up their A-game for the event)

Boys weigh in starting at 7:30am on Friday with round 1 matches at 9.  Girls weigh in at 10am and start wrestling at 11:30.  Friday, all divisions will wrestle two rounds of Championship and two rounds of consolation matches.

WrestlingTexas will be providing full coverage from the Berry Center floor all weekend.  Make sure to stop by and say hello to Ray and the gang and watch twitter and wrestlingtexas for the latest news and images from State.