The brother-sister combo of Chichi and Dot Nwankwo of Richmond Foster were named most outstanding wrestlers in last week’s Longhorn Invitational at George Ranch High School and are this week’s Wrestling Texas athletes of the week. 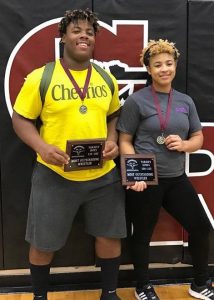 Chichi was last year’s 5A 215lb state champion and 5A most outstanding wrestler.  This season, competing at 185, she is 20-0 with 20 pins. She won the Longhorn Invitational as well as the highly competitive Cy Fair ISD Invitational. She is a three time all American (Fargo x2, Body Bar).  Chichi tells wrestlingtexas.com that she intends to compete at 165 by the end of the season and will go on to wrestle at Oklahoma City College next year. According to Foster head coach Jeff Rayome, “She is the most dedicated, hardworking, and naturally gifted athletes I have been around.”

As a 14 year old freshman, Dot is quickly putting his mark on the 5A 285lb division.  At 12-2, he avenged his first loss of the year (which was his first ever wrestling match) by taking a 6-1 decision over Bryan Rudder’s Bailey Reid (30-3) in the finals of the Longhorn Classic.  Dot took third at the Doc Hess Classic, and second at the CFISD Invitational, where he suffered his only other loss this year, to top ranked 6A Desmon Williams.  Dot is also a defensive lineman for the Foster football team.  He says his objective in wrestling is to “finish what my brother started” and win a state title. He was referring to older brother Nwankwo Nwankwo , a freshman at Texas Lutheran University, who was the state runner up last year, dropping a 6-4 decision to Brian Andrews of Grapevine.

“Dot is an unbelievable athlete, with abilities that are very ahead of his age. He is just flat out fun to coach and watch, as he not only is gifted, but is one of the most coachable athletes I have been around,” said coach Rayome, who also has high aspirations for the pair. “Hopefully these two pick up where ChiChi and their brother Nwankwo Nwankwo left off last year and take a pair of Gold medals from the Berry Center this year.”