Despite the threat of freezing rain and icy roads, day 1 of the CFISD invitational was completed with few surprises, but a little bit of drama.  Full brackets are posted below.

For the most part, the top seeds made their way into the quarter-finals with a couple of exceptions:

120lb – As reported early this morning, top ranked Ty-Rae Carter did not wrestle in the tournament after failing to make weight, but the top four seeds are in the quarters.

132lb – rankings are shifting all over the place here – 3rd ranked Kruljac from A&M Consolidated drops into the consolation bracket.

285lb – Madness and mayhem is the best way to describe the day for many of the ranked heavyweights.  Freshman Chidoze Nwankwo of Richmond Foster (younger brother of last year’s CFISD 285lb winner and 5A state runner up, and reigning 5A 215lb girls state champion)) crashed onto the scene and into the spotlight, beating three ranked 6A wrestlers on his way to the quarter-finals.  Meanwhile, the top two heavyweights in the Houston Region, 2nd seed and (6th ranked 6A) Rob Hill of Langham Creek and 3rd seed (7th ranked 6A) Reese Rusk of Katy Tompkins were injured during their 3rd round matches and are out of the competition.  With the brackets wide-open now, Nwankwo and Top seed (#1 ranked 6A) Desmon Williams of Rockwall Heath may be on a collision course.  Of course, defending TAPPS State Champion, Jared Gaza of CC Veterans Memorial is still in the mix, on Nwankwo’s side of the bracket. 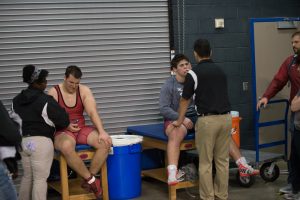 Heavyweights down! 2nd seed Rob Hill (left) and 3rd Seed Reese Rusk (rt) were both injured in the 3rd round

In the girls’ tournament, Weatherford (94.0), Arlington (91.5) and Cypress Ranch (86.0) are in the top three spots, followed by Morton Ranch, Arlington Houston and Houston Clear Lake.

There were no major surprises in any of the weight classes, with all of the top ranked and top seeded wrestlers claiming their spots in the quarter finals.  We are looking forward to some exciting showdowns in the next three rounds of competition.

Mother Nature provided some additional drama with a winter storm moving into the area (seriously, this is Houston, we’re talking about temperatures dropping into the high 20’s!!) With the threat of icy roads in the evening, the Klein Independent School District (Klein, Klein Oak, Klein Collins, Klein Forest) directed the cancellation of all after school activities and ordered all teams to return students to campus.  Through a series of communications, the order was later changed to cancelling all activities after 7:30pm and later there were conflicting reports as to whether it was lifted altogether.  As a result, a number of Klein Forest, Klein Collins and Klein Oak wrestlers forfeited their third or fourth round consolidation matches as buses were loaded.  With the pending storm, Saturday wrestling  and weigh-ins are delayed one hour.  Weigh-ins begin at 8:30, with girls’ fourth round consolation matches starting at 10AM, followed by all quarter final and 5th round consolations.