Houston Westside with only 7 wrestlers puts 1 in the finals and 3 other placers.

106– We saw a semi final match of #7 ranked Gabe Martinez of Allen against #10 Christian Lopez of Westside with Martinez winning by tech fall. Martinez than loses a close one to take 2nd in the finals, while Lopez battles back to take 3rd.

120-This was an all Texas Final, #2 ranked Ty-Rae Carter of Westside after waiting most of the day for his opponent to take the ACT, tech falled his way into the finals to face #6 ranked Alonzo Herrera of Allen which was a great match with Carter edging out the win 5-3.

126-#3 ranked Logan Brown of Allen won a close come from behind match against a Oklahoma state runner up in the semi finals, to lose to an Oklahoma State Champ from Coweta High School,  Bennett Moudy.  Westsides #8 ranked Antonio Figueiredo takes a 5th place finish.

145-#5 ranked Hunter Gibson of Allen took the 3rd championship by beating another state qualifier  by a 3-1 decision with a last second takedown in regulation. Trey Graham of Westside came up short and didnt place

152-Allen’s Tyler Jacob was 1 match away from placing 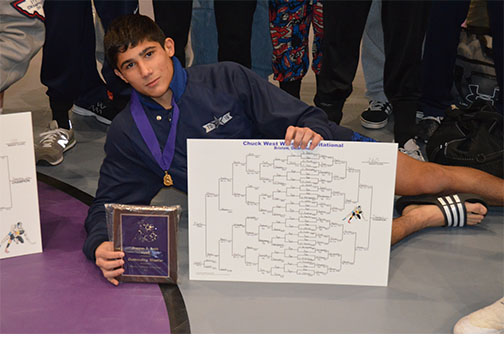 170-Cole Reed of Allen was a pinning machine, he had 6 wins all by falls to take a 3rd place finish after losing his 2nd match to one of the finalist from Geary Oklahoma.

195-Was a border war, battle of the State Champs, #1 Texas ranked Mark Inglehart of Allen and #1 ranked of Oklahoma  Bear Hughes of Coweta HS. This battle went to Hughes of Oklahoma with a 4-3 decision. they could meet again next week in Reno, Tournament of Champions.

220-Was all #2 ranked Nico Manzonelli, he pinned his way all the way through for a championship for Allen’s 6th

Allen High School will travel to Reno next weekend to the Tournament of Champions, Westside will travel back to DFW to attend the Santa Slam in Coppell