The Stampede didn’t disappoint on being one of the toughest tournaments in the country, and with the way its set up with Pools the first day and brackets the second day everyone gets minimum 4 matches.   Allen High School came into the tournament ranked 23rd on Intermat, and liked only 16 team points from beatin an Archer Georgia Team who is ranked #12, who came in 2nd, Tuttle Oklahoma takes home the Championship Trophy

113-Logan Brown, he revenged his loss of last week to a Coweta Oklahoma wrestler to make it to the 5th place match where he placed 6th

120-Alzono Herrera, was in the Silver bracket but made it to the finals of his bracket, he places 2nd in the bracket

138-David Washington, filling in for a sick Hunter Gibson,  placed 13th with a 9-7 decision over an Archer Georgia wrestler.

152-Braedan Redlin,  who had 4 state champs and multiple state placers pinned his way into the Semi Finals than beating a 3rd in state placer from Christian brothers in OT to be Texas lone Finalist in the Gold bracket he takes 2nd

160-John McCabe, loses his first match of the year to a multiple state qualifier from Missouri, 7-4, than a 3-2 decision to the Ark City Kansas State Champion. won his way back to a 9th place finish

195-Mark Ingleheart, Mark also lost his first match of the year, a 4-3 decision to Garden City Kansas State Runner Up last year, Zeke Herrera, than a follow up lose to a Park Hill Missouri wrestler, he wins 2 in a row afterwards to place 13th

285-Nico Manzonelli, -takes a 7th place finish with a fall

106-Ethan Nelson, got his 4 matches in the pools and didnt wrestle in the bracket matches

113-Caden Patrick, got him a 15th place finish in the Silver Bracket

120-Xavier the X Torres, looses his first match to our neighbors to the North, Tuttle Oklahoma’s Noah McQuigg who placed 2nd last year in State, he than beat 3 Oklahoma state placers in a row to advance to the 5th place match where he placed over all

126-Bailer Thomason, also lost his first match in the Gold Bracket, won his next match before losing to Runner up State Placer from Stillwater, and he places 12th over all

132-Marcos Rubio, lost than won his way to a 9th place match where he barely loses a 3-2 decision to Farmington HS Missouri, in the Silver Bracket

138-Nathan Garcia, got him a 12 place finish in the Silver Bracket

145-Cameron Dinga, got his 4 matches in pools

152-Logan Ellis, got his pool matches as well

160-Gavin Obrien, won his first match in the silver bracket , than placed 11th over all in the Silver Bracket

182-Christian McBroom, takes a 12 place finish, he lost to Allens Josh Myers in a last second take down, was a great match 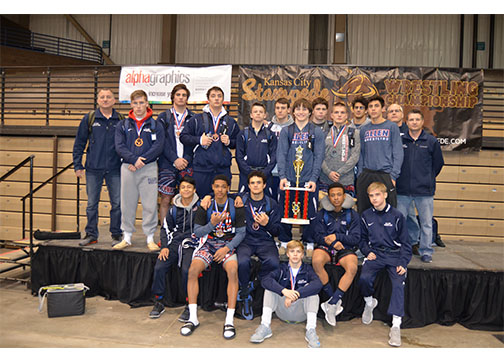