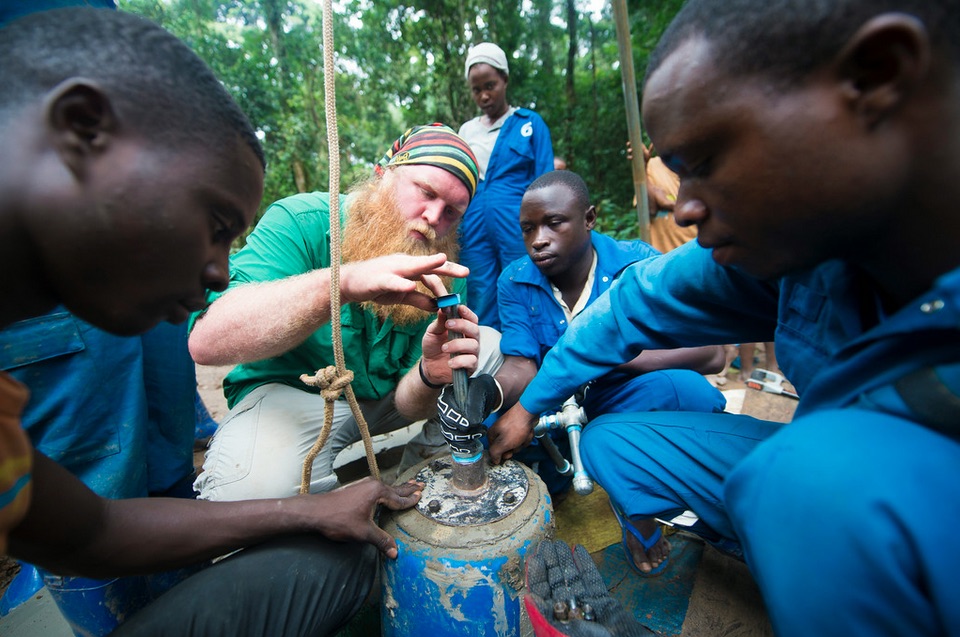 Bishop Lynch High School graduate Justin Wren (middle) works on a water well with others in the Congo. Wren, a mixed martial arts fighter, works with groups in the Congo to help the disadvantaged Pygmy people. (Photo submitted by Justin Wren)

Eyes blackened and his face red with a sheen of sweat, mixed martial artist Justin Wren pounded his chest and raised his other arm in victory.

This win was different. This time it wasn’t for him.

Moments after being declared the winner Aug. 28, Wren slipped into Swahili as he spoke to a group watching in the Democratic Republic of the Congo’s Ituri Rainforest:

“My family, my brothers, I’m in here tonight because I love you. Because we’re one. We are not different. I miss you. I can’t wait to see you again. I love you so, so much.”

Slideshow: Justin Wren and the pygmies of Congo 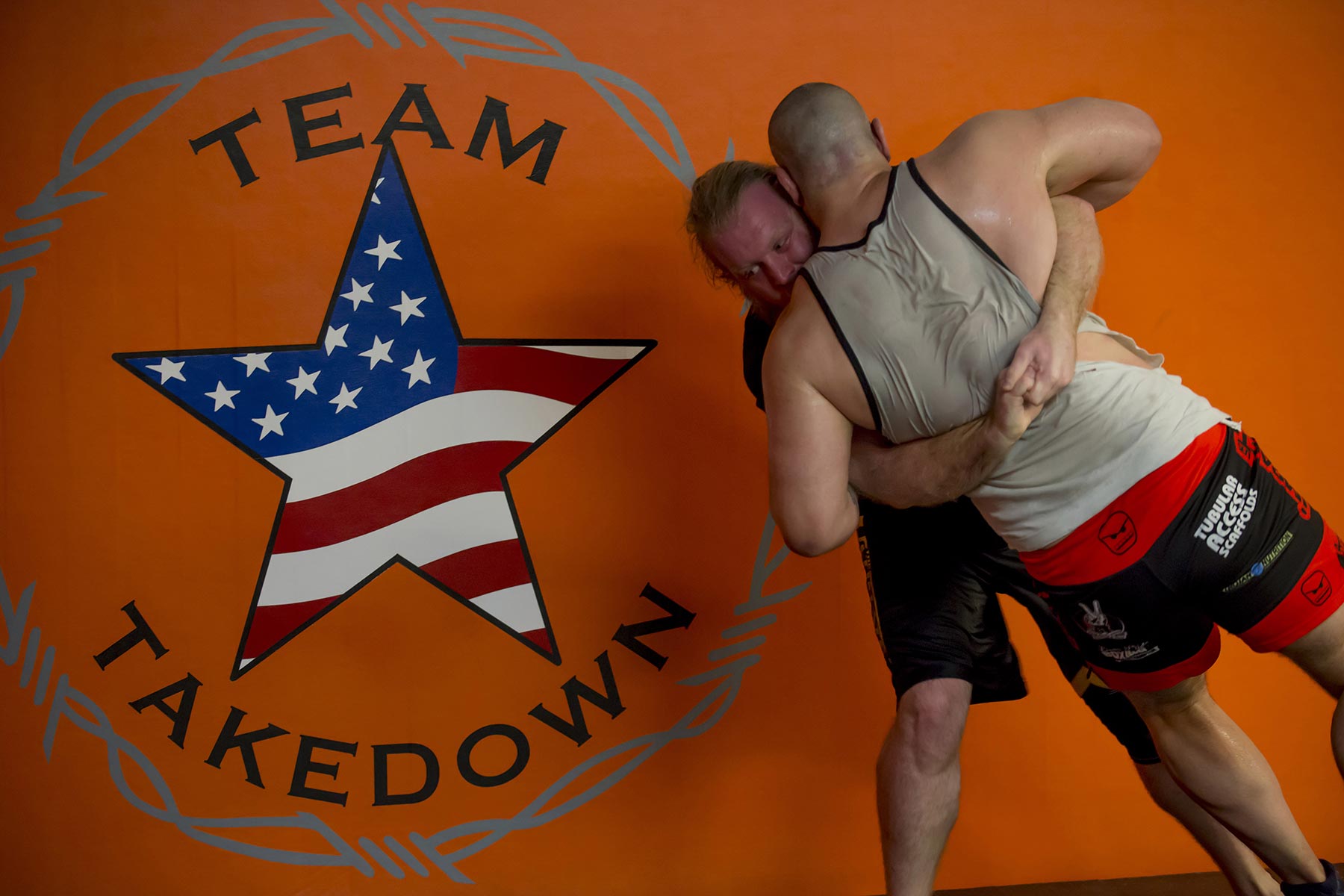 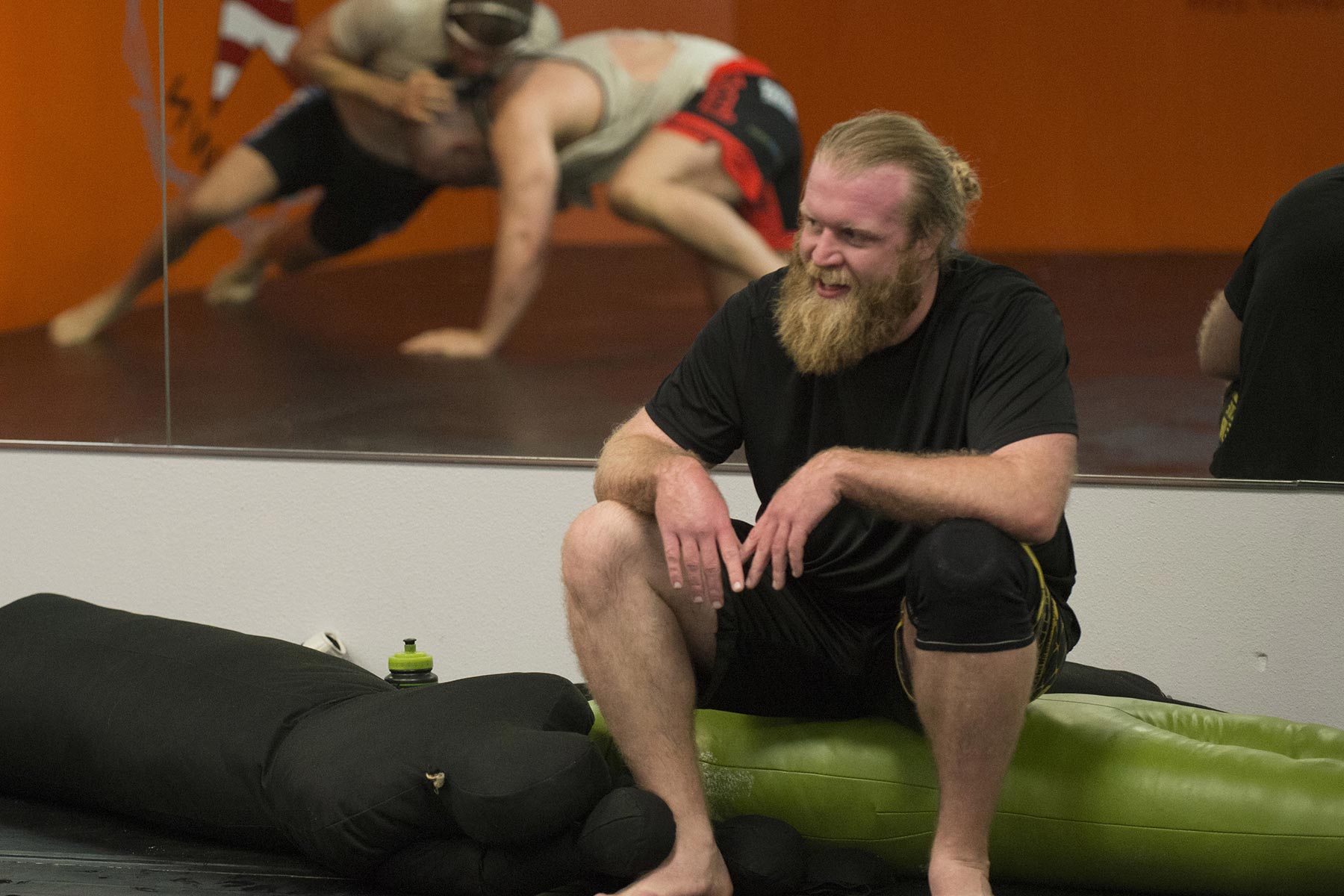 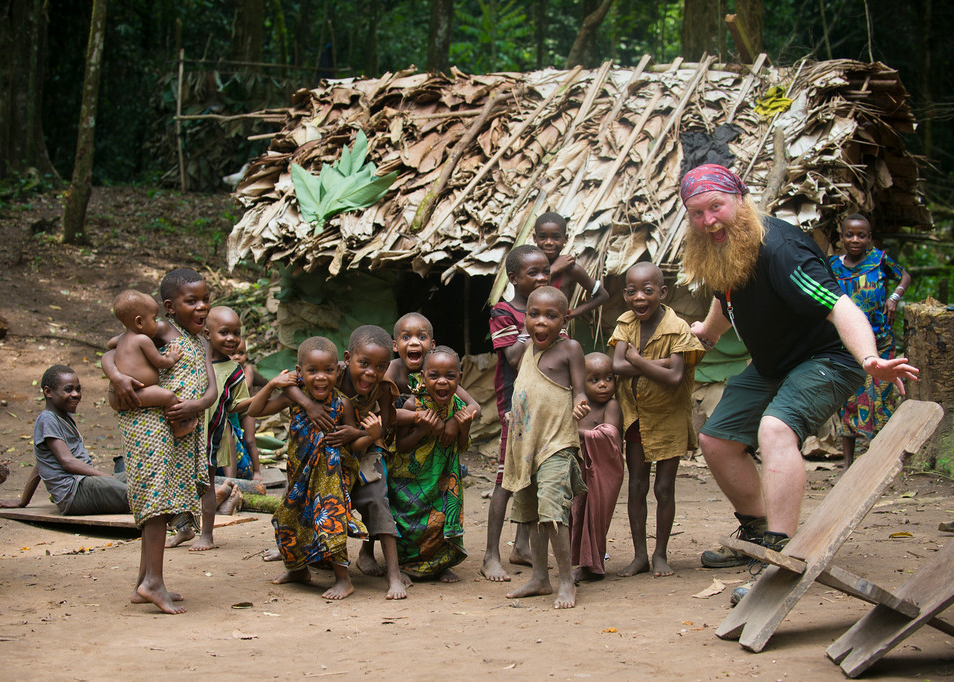 Slideshow — 3 of 4: Wren (far right) and a group of Pygmy children gear up for a ceremony to celebrate the completion of a water well in the village. (Photo submitted by Justin Wren) 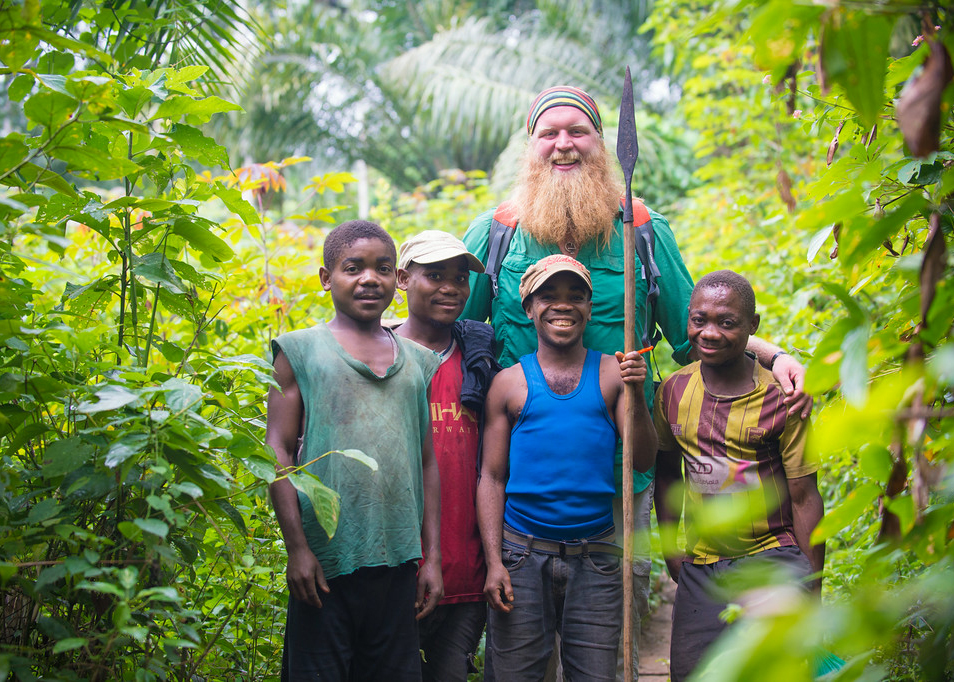 Slideshow — 4 of 4: Wren (back middle) has made many trips to the Congo to live among the pygmies. “I knew that to actually make some sort of difference, I’d have to live with them and actually learn what would help them,” Wren said. (Photo submitted by Justin Wren)

His impromptu words were a reminder that his fighting had purpose — to help forge a better life for the pygmies in eastern Congo.

“I’m not just figuratively fighting for them, I’m literally doing it so that we can buy more land for them, drill more water wells and start more farm projects,” Wren said.

In the Aug. 28 Bellator MMA match on Spike, judges declared Wren the winner over Josh Burns by unanimous decision after three rounds.

“Five years away from the cage and Justin Wren’s return is memorable,” the announcer said. “He goes the distance in an impressive and entertaining performance.”

The moment was particularly poignant as the former Bishop Lynch High School wrestling champion celebrated his return to MMA after years of personal setbacks.

“He’s always been a competitor; he’s always had that fire in his belly. So maybe he lost that fire and he’s regained it through his purpose now,” said Wren’s coach Kenny Monday, who also coached him at Bishop Lynch.

The initiative Wren started in the Congo, called Fight for the Forgotten, brings clean water, land and farming expertise to the pygmies, a widely marginalized group of people living mostly in the African forests.

“When I fight and I get a win bonus, I’m giving 100 percent of the win bonus to the cause,” Wren said.

An All-American wrestling champion in high school, Wren bypassed college to train at the U.S. Olympic Education Center at Northern Michigan University after he graduated in 2005.

While fighting an Olympic bronze medalist in an international match, Wren broke his elbow. One doctor told him he might never fight again.

Faced with the possibility of losing his Olympic dreams, Wren fell into depression and turned to drugs as an escape.

“I really did need to numb the pain, but I enjoyed that [the drugs] numbed my depression,” Wren said.

After surgery, he started competing in mixed martial arts, but the drug use didn’t stop.

Pretty soon he went from painkillers to marijuana, cocaine and alcohol.

Although Wren hid it for a while, the addiction ultimately got him kicked off his team at the highly regarded Grudge Training Center in Colorado.Then, he got sober and found redemption in his faith.

“It honestly wasn’t rehab that helped me overcome addiction, it was my faith,” Wren said.

“Sometimes those things happen to make you a better person,” Monday said.

Journey to the forest

About four years ago, Wren was at a crossroads. It had been nearly a year since his battles with drug addiction and depression had taken him away from fighting.

Eleven months sober, he prayed a simple prayer: “God, what do you want me to do with my life?”

Wren said he got his answer in the form of a vision that played as vividly as a movie in his mind.

“I saw myself in the rainforest; I didn’t know where it was. I was walking down a foot path and there was drumming in the distance and as I got closer I heard this very distinct and beautiful singing,” Wren said.

God had breathed purpose into a life I didn’t think was worth living, and I had been set free. I knew the same God who loved the Hell out of me deeply desired to love the Hell away from my new family, the Mbuti Pygmies. Using me, somehow, He’d make sure they weren’t forgotten.

Justin Wren, Fight for the Forgotten

When Wren told his missionary friend, Caleb Bislow, his eyes lit up. Bislow explained to Wren that his vision must have been the pygmies in the Congo.

Three and a half weeks later, Wren found himself in the jungle, where he learned first-hand the hardships of the pygmies.

The pygmies are treated like animals, Wren said. They are enslaved and denied land rights by the rivaling non-pygmy group, Mokpala.

Rebel groups often kill, rape and have been reported to eat pygmies.

“I knew that to actually make some sort of difference, I’d have to live with them and actually learn what would help them,” Wren said.

Wren didn’t just want to give the pygmies a one-time handout.

“In a position where someone is in poverty, they don’t need charity, they need an opportunity out of their poverty,” Wren said.

Initially, he and his wife raised money to purchase 300 acres of land and build two water wells.

Wren partnered with Shalom University in the Congo to employ full-time staffers and with Oklahoma-based nonprofit Water4 to help with drilling the water wells.

They worked with pygmies and non-pygmy groups to make sure the whole community was in agreement for change.

“It’s got to be something that they grab hold of, that they feel like has become theirs,” Wren said.

Today, the pygmies legally own 2,470 acres in the forest, and recently the 26th water well was finished. 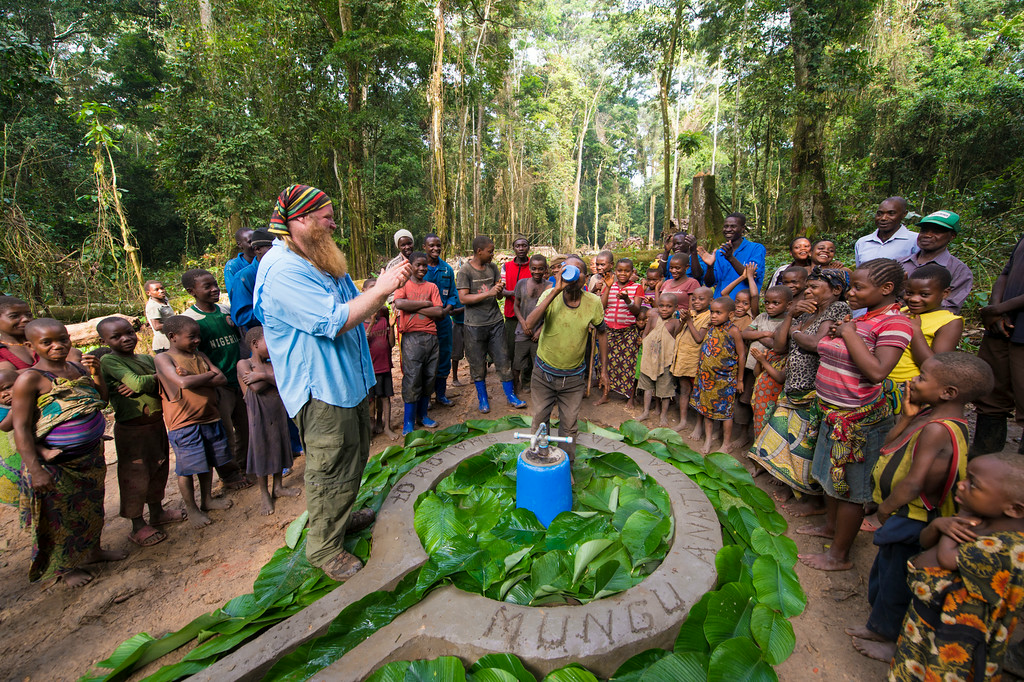 Wren (left middle) celebrates the completion of a water well with inhabitants of a Congolese village. (Courtesy Justin Wren)

Wren wants to reach the point where hundreds of water wells can be drilled in a year. He foresees establishing farming projects in more villages and planting trees to combat deforestation.

He wrote a book about his experience in the Congo, Fight for the Forgotten: How a Mixed Martial Artist Stopped Fighting for Himself and Started Fighting for Others, and is working with filmmaker Derek Watson to produce a documentary to raise awareness.

Since Fight for the Forgotten has become an official initiative under Water4, Wren said he can spend more time training.

“We thought it would be a really good opportunity to raise some money for Justin’s causes in the Congo and then we could surround him with the infrastructure that he needs to keep going,” said Richard Greenly, who founded Water4 with his wife, Terri, in 2008.

Wren hopes that fighting for the next five to seven years can help set up Fight for the Forgotten for the next 50 years financially.

After each fight, he plans to go back to the Congo to spend time with the pygmies he calls his family.“I’m a fighter for a reason I believe, and I got a fighter’s heart to not just get in the cage, but go to the Congo and fight for them,” Wren said.

Digital Communities Coordinator Heather Noel can be reached at 214-977-8715.